Markets have fallen sharply over the last few days, ostensibly because of worsening reports over the spread of coronavirus, and we wanted to communicate our thoughts on the matter.

When faced with any threat the only two questions that matter are:

We have been keeping a close eye on the coronavirus and its dispersion. It clearly raises a threat to the global economy because, even if the mortality rate is not wildly different from other viruses, the lack of an antidote and its high rate of contagion means it requires higher levels of quarantine. Clearly the first concerns are human concerns and in limiting the number of cases and fatalities. While we in the UK are mercifully largely unscathed (so far) you can easily envisage the supply chain interruptions which have disrupted businesses already and are likely to get worse.

The difficulty in formulating a course of action is that it is trying to analyse a second order effect under imperfect and highly dynamic conditions. We can understand that the effect on the global economy is going to be negative but the extent and timing is unknowable.

You then have to add a third order analysis: what is the appropriate response for stock markets and asset prices? Because the question is not whether we think coronavirus is a threat, it is whether this threat has been reflected in market/asset prices. Have markets overstated or understated the threat?

2) What should be done about it?

Here there are some general rules. Stock markets get inefficient slowly. Prices can get screwy but it usually takes a long time to get there. The price of Tesla is clearly screwy but the stock has been one of the most talked about for years. The retail investor driven squeeze (which is becoming highly reminiscent of the dotcom boom) has been playing out over months not days.

However, in responding to the form of data represented by coronavirus markets are actually highly efficient. Academic studies have shown that foreign exchange markets encapsulate news within three seconds. That is, if an event takes place and hits the news, the currency prices flex to incorporate this within three seconds. It is the most efficient market discovered to date. Stock markets are not this efficient but they respond to news fast.

In reality, the best signal for how much economic damage is likely to result from coronavirus is not independent analysis but the stock market itself. The market falls are themselves the consequence of news emerging and being rapidly responded to, not of forward looking analysis.

If you believe that markets are going to fall further or rise sharply you are, in effect, saying “the market is wrong”. Fundamentally you are saying that every single market participant whose interactions and transactions have led to prices reaching this perfect point of equilibrium between buyers and sellers…..are all wrong, and that you know better.

Now that may be true. But it’s terribly unlikely and as such not something you could reliably invest in.

Another market truism is that markets respond in an exaggerated fashion to uncertainty and coronavirus is without question uncertain.

All things considered, stock markets get it generally right but often overshoot. This is what happened with SARS in 2003, the S&P declined by 15% as the news emerged and the virus spread but by the time it was contained in June stock markets had already fully recovered. The initial concerns loomed large in investor sentiment…and then passed.

Viruses come and go, but buying assets when they are low and selling when they are high is about as simple a maxim for making money as an investor can get. We have not made any changes to asset allocations yet, but are watching circumstances closely; if there are changes to be made we are far more likely to be buyers after these recent falls. 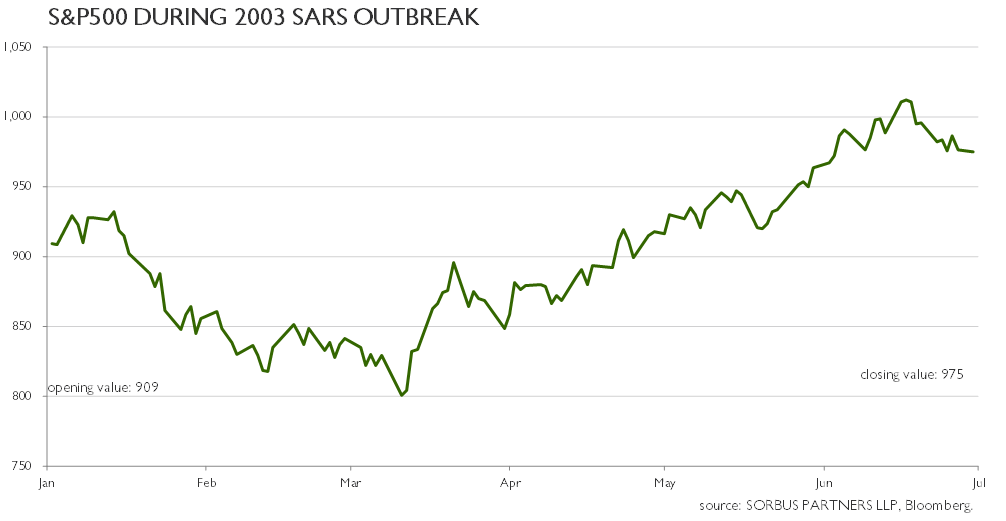