The S&P 500 gained 16.8% during 2014. Following a poor first quarter when the U.S economy actually contracted due to extreme weather conditions, growth picked up markedly over the course of the year. Given the US is still a very domestic based economy this enabled US corporate profits to grow despite more difficult economic conditions elsewhere in Europe and China.

The much flagged major milestone of the end of QE in October also failed to put much of a dent in markets. 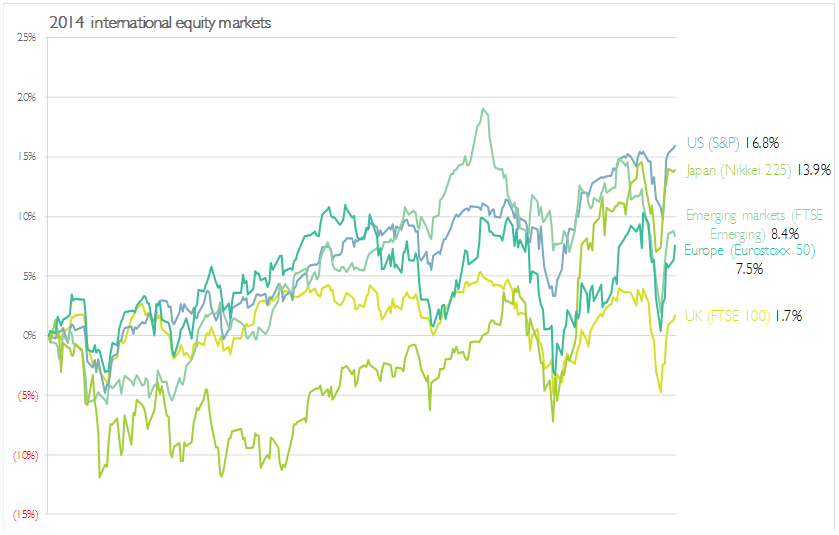 However perhaps the major dynamic propelling the US indices to record levels was the continued pace of share repurchases by US companies. Companies in the S&P spent a staggering £567bn buying back their own shares (a rolling twelve month basis at the end of the third quarter), an annual increase of over 27%. This together with positive cash inflows from investors meant more buyers than sellers and the consequent rise in prices. This demand from corporates remains one of the major if not the defining reasons behind the US market rise.

The Nikkei index fell during the early part of the year as progress on trying to reinflate their economy seemed to have stalled and the economy slipped back into recession. However it received a significant surprise boost at the end of October; Japan’s central bank announced it would pump trillions more into the economy by expanding its asset buying programme by a third and also buy property and stocks as well.

In addition the Japanese Government pension fund, the country’s largest, will raise the amount of its portfolio allocated to stocks significantly. All this meant huge future inflows of cash into the Japanese stock market and sparked an immediate rally in the Japanese benchmark indices. However, this was a closely contested vote at the Japanese central bank and was only approved by a vote of 5-4 . Quite what the long term effects will be of this economic experiment, which significantly increases the already massive debts of the Japanese nation, but it will define the lives of the next two generations of Japanese.

Many emerging equity markets struggled with the effects of a stronger dollar and weaker Chinese demand. Other notable events include the plight of the Russian equity market and also their currency the rouble, which at one point in the week before Christmas had halved over the year and lost 23% in value against the dollar in just three days. Economic sanctions following the Russian incursion into Ukraine continue to bite but the precipitous collapse of the oil price has accelerated the slide given their economy is still so reliant on petro dollars. The sanctions are slowly but surely squeezing the Russian economy.

Mario Draghi the ECB President continues with a plan to implement QE despite opposition from parts of the council most notably the German quarter in the form of Bundesbank President Jens Weidmann. When, how and in what form such QE takes will be one of the major determinants of Eurozone economies in 2015. 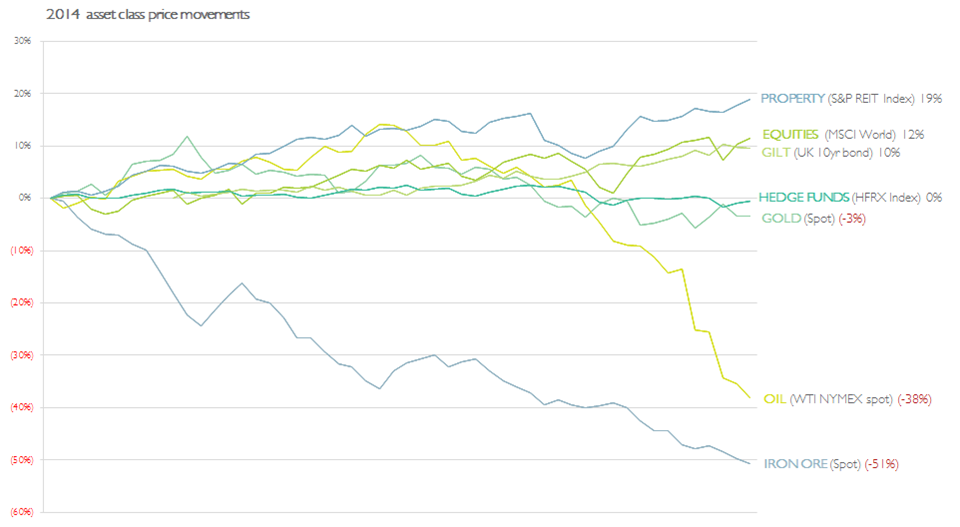 Commodities suffered significant declines as the major purchaser of many of the worlds raw materials, China, saw its economic growth slow. Kudos to anyone who guessed that iron was the worst performing industrial commodity when oil has been capturing the headlines. The much heralded commodities “supercycle” of a few years ago is well and truly over.

However perhaps the most significant commodity event from the view of the global economy and consumers was indeed the movement in the oil price. We have discussed the consequences in “Oil Toil” but a quick look at the causes is appropriate. Global oil production has been running ahead of demand for some while thanks to the surging output of the relatively new US shale industry where oil is produced by blasting apart shale rock.

In previous years, before the shale oil was an influence, the oil petroleum exporters (aka OPEC) would try to control the price by reducing production quota and thus restoring equilibrium. However this time in response to the falling oil price Saudi Arabia (the only OPEC member financially capable of producing below full capacity and therefore the only member that can significantly affect marginal oil production) decided to take no action to limit their production.

Saudi claimed that as the non-OPEC oil producers were producing at increasing capacity then limiting their own production was futile, though some have speculated that this strategy appeared designed to let the oil price fall to a point whereby US shale oil production became uneconomic. This would then reduce future shale production and so in the longer term restore the influence of OPEC members in determining the price of oil. Such a tactic is not without political risk as many oil producing nations are running large fiscal deficits and so their ability to quell dissent from the population through subsidies and continued state employment is questionable. However, the pain visited on US shale investors is as nothing compared to the pain visited on Russia, Iran and Venezuela (amongst others) which will not be an unpleasant consideration to the White House.

Governments bonds were the among least favoured of asset classes at the start of the year with most prognosticators forecasting poor results due to rising interest rates. In the event they produced strong returns, particularly long dated issues, as yields compressed even further. Sovereign debt has ended up in a strange place. Italian 10 year debt has a coupon of 1.9%, Spain’s is 1.6%, whereas the same duration US debt yields 2.2%. While the raw data would indicate that US debt is higher risk (which it clearly is not) this mispricing is a function of expected QE across the Eurozone in 2015 unnaturally driving down gilt yields.

This has a knock on effect in other assets where returns are often proxies for sovereign bond yields, such as global property which provided double digit returns over the period.

The hedge fund industry continued to suffer as poor returns, particularly compared to equities and bonds, meant further outflows of funds and closures.

2014 saw hedge funds closing at record rates as investors eventually become wise to the high charges and often undifferentiated strategies which can be replicated much more cheaply elsewhere. Only the very large funds continue to attract new money.

Also taking a dive was the Bitcoin. We noted in December last year that the first analyst report produced on Bitcoin (by Bank of America Merrill Lynch) forecast the price to rise from $1,052 to $1,300. Within two days the price had halved.