“Disinflation or deflation is a growing global problem. In a world of falling productivity, there is no natural buyer of last resort; there is no one naturally demanding dollars so growth must be at someone else’s expense; a currency war is inevitable whether through internal devaluation like Spain in recent years or external devaluation like Japan

The Eurozone continues to provide a plethora of conflicting data, some positive some not. On balance and overall the last month has not been positive.

The good news includes Greece being able to access capital markets for the first time since the Eurozone crisis began. It planned to raise €2bn of 5 year bonds with an estimated coupon of around 6%. In the event it attracted €20bn of orders and raised €3bn at 4.95%, much lower than most analysts expected.

Now before the champagne corks are discharged the amount being raised is trivial, the duration is short which indicates the lack of appetite for any longer term paper from Greece, and the coupon is the highest in Europe. Additionally the bond has been structured under English law which makes default restructuring more difficult. It is however a symbol of normality returning and symbols are important.

It also reinforces the recent trends of rapprochement from debt markets towards past sinners. Ireland’s return to the debt markets in December was met with a four times oversubscribed offer and in Spain 10 year sovereign yields have fallen from a high of 7.75% in July 2012 to just 3.31% today. After the Greek bond issue the Financial Times described the appetite for Eurozone periphery debt as “ravenous”, though SORBUS categorically does not share this hunger.

Under normal circumstances these trends are undoubtedly positive as the ability to finance debt and raise additional funds at a lower cost than the outstanding debt has an immediately positive impact on government finances. It speaks for the austerity measures endured and implies the economic stability and responsibility that debtors crave.

But the difficulty is that inflation has gone from low to negative across much of the Eurozone. (1%) in France, (2%) in Holland Belgium and Slovenia, with Spain Italy and Portugal on (4%) and Greece and Cyprus bring up the rear with (6%) and (10%) respectively.

The consequence of this deflation is that debt continues to climb even though the austerity measures have brought them to a primary surplus (where government receipts are higher than its spending – excluding interest payments).  Italy’s debt has risen from 119% of GDP to 133% since 2010 despite balancing its books during the period. Returning to Spain, if you factor in the deflation then the real yield – the underlying cost of servicing debt – is in fact 1.4% higher than it was in 2012. 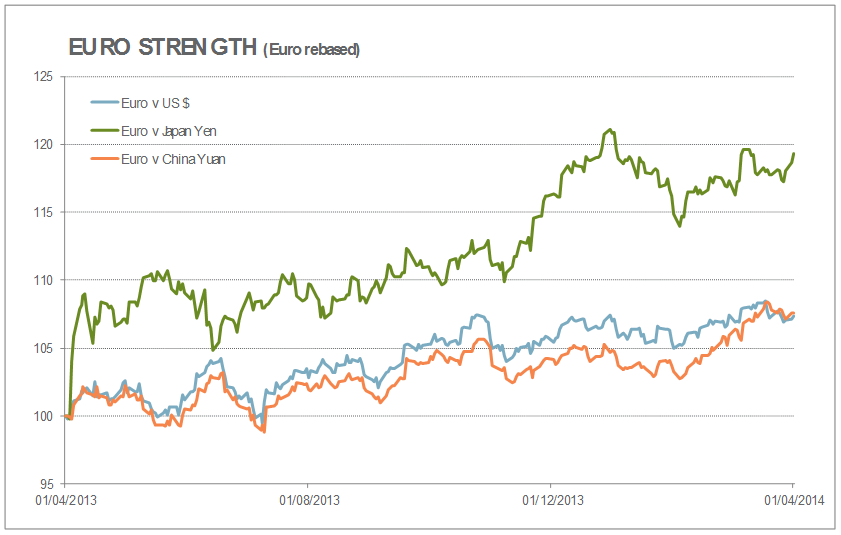 The ECB has been sanguine on the prospect of deflation blaming the condition on temporary lower energy costs. But we share neither the analysis of the causes nor any degree of comfort that the condition will be temporary. Instead we would suggest that deflation is a growing global threat and the Euro has been losing a currency war, a war it does not appear to have noticed it was a participant in.

Japan and China have been the most aggressive in devaluing their currencies which has the consequence of making their exports more attractive and imports more expensive, in effect exporting deflation. With the US and UK aficionados of quantitative easing, which as a by-product is likely to reduce a currency’s relative strength, the EU appears oblivious to the consequences of allowing the Euro to rise against its competitors, or unable to react.

That the ECB does not refer to the fact or the consequences of this currency war should not be taken as an indication it is unaware. The damage to EU competitiveness will be obvious, but its reticence stems from the inability of the EU to act. As has often been the case throughout the financial crisis the Eurozone countries and the ECB seemingly drifts around unaware and unresponsive in the short term before eventually finding a solution when crisis is upon it and forces a reaction. It is not that the ECB doesn’t want or need the Euro to be lower but it does seem to lack the skill and the determination to drive down the currency in competition with other central banks keenly opposing it. It is at present the global currency whipping boy.

Mario Draghi famously said that he would do “whatever it takes” to save the Euro before adding with relish “and believe me it will be enough”. With a directness of language that Clint Eastwood playing Dirty Harry would admire, the statement was in marked contrast to prior equivocation and it worked a treat. Without ever having to actually do anything the cost of credit to Eurozone countries fell sharply and crisis was averted. It has sometimes been referred to as the most effective three word statement by a Roman since Julius Caesar said “veni, vidi, vici”.

However the words remained just that, words, and their power has waned. Words alone will not be sufficient this time and the motivation within the Eurozone to act is rising. We would expect the steeply slowing export competitiveness of the EU, particularly as Germany is a disproportionally large beneficiary of lower relative rates, to spur the ECB into a noticeably more accommodative state of mind.

If words being translated into action is required to drive down the Euro then this must be an expected outcome. The ECB has never been short of weapons, it is after all the world’s largest trading block,  and it is why Draghi’s words were so powerful, it has simply previously lacked the collective endeavour to use them.

There will of course be counter measures deployed by nations determined to ensure their currencies do not appreciate but we would expect the euro to fall over the next three months.

Our clients will note that over the last month we have systematically hedged our exposures to the Euro and the Eurozone (from previously unhedged exposures) in order to protect our clients from adverse currency movements.