“Shale is important for our country.  It could bring 74,00 jobs, over £3bn of investment, give us cheaper energy for the future and increase our energy security.  I want us to get on board this change that is doing so much good and bringing so much benefit to North America.  I want us to benefit from it here as well.”

“We are all losing our shirts. We’re making no money. It’s all in the red”

Shale Gas is coming to the UK and it is grabbing increasing attention from UK citizens and investors alike.  As portrayed in the mainstream media, shale gas can provide limitless energy, at the cost of unsightly and potentially hazardous drilling side effects.  Look a little deeper and the profitability of the industry as a whole is questionable.

A decade into the North American Shale boom, the revenue gains are still being outpaced by the capital investment required for expansion.  Chesapeake Energy Corp, a bellwether of the industry, has now started selling off assets to cope with the continuing negative cashflows of shale gas exploration and production.  The production of Natural Gas in North America has plateaued since January 2012, with gas prices depressed and capital investments still rising.

The focus of the UK government is on wining the next election.  Mori Ipsos highlighted today that the most important concern of voters is the economy.  Attracting super-majors such as Total to invest in the industry, is an excellent demonstration of the government’s commitment to the economy. Three of David Cameron’s four reasons to like Shale’s arrival in jobs, investment and energy security are valid.  With the North Sea oil production falling 57% since the peak in 2009, efforts to find a replacement should be welcomed.  However, claims of ‘cheaper energy’ are certainly not a given.

What should investors do? Two snapshots from the more mature US market. Chesapeake and other Shale focused firms are still trading significantly below its 2005 levels, let alone their 2008 peaks. Highly volatile performance in the pure plays is a given.

Second, last year, Warren Buffet bought a $4bn stake in Exxon Mobil, which in turn has remained relatively uninvolved in the Shale surge, leaving it well placed to pick up distressed assets if the industry worsens.

Shale is here to stay, but financial exposure to its surrounding hype is high risk. 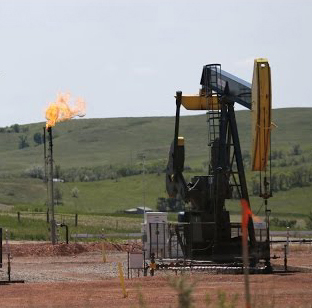 The geologist Arthur Berman says the recently published report by the British Geological Survey on shale gas only addresses gas in place and not technically recoverable resources let alone commercially recoverable resources. After applying US EIA and PGC (Potential Gas Committee) methods, the reserves would fall from 1,300trn cubic feet to just 42 tcf, or 3% of gas in place. Whilst still a substantial volume, roughly equivalent to the Barnett Shale formation in the US, it will hardly change the energy future of the UK. Based on well productivity from Barnett, it would take approximately 30,000 wells to fully develop the Bowland potential, which we believe in the UK is a no-starter due to population density etc. Even if the wells did all proceed, the time taken to get regulatory approval would make it prohibitive.