We entered 2013 with an investment strategy that preferred developed equity markets (particularly UK and US and smaller companies) and an aversion to all sovereign debt and emerging market equity.

This has served our clients well in 2013 but over the course of the last two months we have been significantly altering our asset allocation and have reduced our exposure to selected smaller companies. Below we outline the major elements of this transition and the rationale for the transactions.

At the start of 2013 our analysis suggested to us that if we accounted for the impact of QE then fair value for equities was (as measured by the FTSE 100) around 6700. It actually first reached that level in May before touching these levels in August, September and again at the beginning of November. It was at this point that we started to reduce allocations aggressively. For most clients with absolute return objectives we halved equity exposure form around 60% to 30%.

Equities remain our preferred asset class but tactically we wished to reduce this exposure in the hope and expectation that the profound global economic uncertainty that we are enduring will provide an opportunity to rebuild this equity exposure once markets become cheap again.

We were also influenced at the start of the year by an absence of alternatives to equities, but this has changed over the course of the year by a significant steepening of the gilt yield curve. (FIGURE 2) 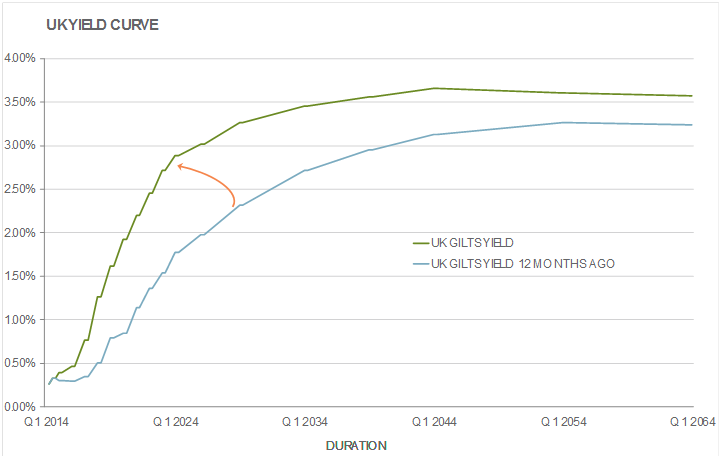 It is important to place gilt yields in context; a yield of 2.8% is hardly exciting, but it is substantially more attractive than the 1.7% on offer a year ago. We do not consider UK gilts (or indeed any other sovereign debt) as an effective long term investment at these levels but they have growing attractions as a vehicle to park wealth in the short term.

French and Fama in their three-factor model (which contributed towards Eugene Fama’s Nobel Prize) provided the evidence that there are a limited number of ways to beat stock markets; two of which are simply to buy smaller companies and to buy value companies (as opposed to growth stocks). Despite the weight of evidence supporting their analysis few professional or institutional investors incorporate this research in their investing strategies. We do. Typically in excess of a third of our client’s equity exposure is represented by smaller companies with the other two thirds being overwhelmingly invested in value stocks.

The smaller companies have had a very strong performance throughout 2013. Unfortunately this has compelled us to reduce our client’s exposure to two companies: 4Imprint and Optimal Payments. We originally bought these when they were trading at around 155p and 60p respectively. 4Imprint finally looked fairly valued to us at 630p (5x initial cost including dividends) so we have been reducing our stake there. Optimal Payments has been reduced for risk mitigation reasons — at 340p (6x  initial cost) it represented too great a specific risk in clients portfolios.

There is an old adage that “You can never go bust taking a profit”. This may be true but we prefer to run with our winners and would retort that “You never get rich by selling your best companies”. In this case Optimal Payments remains a core long term smaller company investment but having grown so big we had to trim its size.  Hopefully we will continue to be placed in this enviable position by the strong performance of the smaller companies.